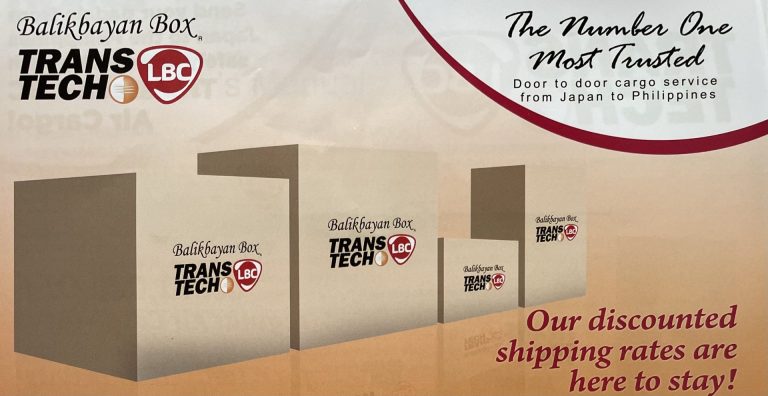 Sending a balikbayan box from Japan to the Philippines wasn’t as l hard as I thought it would be. Thanks to Transtech. Transtech is the courier company that I contacted to send my packages. It’s safe to say it’s reliable because I’ve sent packages through them twice already, and I haven’t encountered any problems so far.

Don’t worry about the language barrier because the site is in English, and the staff speaks Tagalog and English.

Steps to Send the Balikbayan Box

Here’s the guide to successfully send your Balikbayan box:

Step One: Order the box

Go to their website to order the box. They don’t allow you to use just any kind of boxes that’s why you need to order from them. The boxes come in different sizes: compact, premium, cube, and super value. The price varies according to the size. The bigger the box is, the more expensive it costs.

Step Two: Wait for the box and pack.

After ordering, wait for the empty box to arrive. When it does, you can start packing. By the way, there are important rules to note while packing.

You may pay the bill after packing, or even if you’re not finished packing yet. How will you know how much should you pay? Scan the papers that come along with the box. There’s a bill there. It should look like this

So, as you recall, I said that the price varies depending on the size of the box and the destination. Here’s a brief calculation of how I settled with a certain amount.

Where do you pay the bills of payment?

You can process the payment at any convenience stores listed in the bill. I paid for mine at a Family Mart branch if you may ask.

Step Four: Ask them to pick up the balikbayan box.

When you’re done packing and paying for the bill, the box is ready for pickup. Call them to inform that the box is ready. You may also go to their website and process the pick up request there.

But what about if you’re a busy bee with a full schedule? Worry not because Transtech has a relaxed pick-up schedule. You’re free to set the date and time you want them to pick up the balikbayan box. This certainly gives an advantage to those who barely have free time because of their jobs.

By the way, remember the items list? Don’t forget to put that in the plastic attached outside the box.

How long does it take for the box to arrive in the Philippines?

It takes approximately four weeks to seven weeks for the box to arrive depending on the Philippines’ region of destination.

Here’s the specified details for each region:

Please note that after the box has been picked up, it won’t be sent to the Philippines right away. Rather, it’ll be inspected first at their warehouse somewhere in Tokyo. Therefore, you shouldn’t start counting down from the pickup day. Also, they won’t inform you that it’s been shipped so all you can do is wait for it to arrive at the doorstep of the receiver.

When it comes to my experience, the balikbayan box arrived after eight to nine weeks from the day they picked it up. I don’t know when the actual shipment date was. The box maybe was stuck in the warehouse for quite some time so it took longer.

Have you ever sent a balikbayan box from Japan to the Philippines? How did it go? Did you use Transtech?